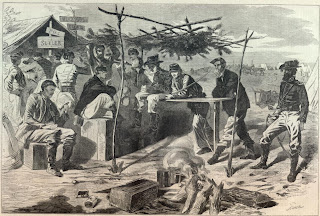 Robert Grandchamp, the hands-down, go-to guy for all things related to Rhode Island in the Civil War, recently sent me the following little snippet concerning a rather forgettable incident concering the 48th Pennsylvania. The story comes to us from Captain J.W. Grant's short work, The Flying Regiment: Journal of the Campaign of the 12th Rhode Island Volunteers, published by Sidny S. Rider & Bro., Providence, R.I., in 1865. The 12th was brigaded with the 48th following the battle of Antietam, although this incident occurred in March 1863. For some reason, it did not appear in either of the 48th's two regimental histories. I wonder why???
"The camp of the Twelfth Rhode Island Volunteers. . .was the finest looking camp on the ground. The streets were well laid out, and were kept swept clean. The tents were new, and presented a neat, uniform appearance.
There was a great improvement in the regiment after coming here. We were well clothed, and as finely equipped as any regiment in the field. We also had the Springfield rifled musket, which is considered the best in the service.
While at this place, we had a fray in camp, which came near being a serious affair. I was in the qautermaster's tent the evening of the 5th of March, when at eight o'clock our orderly came in, telling us our company had received a visit from the 48th Pennsylvania, a regiment adjoining, who came provided with clubs and stones, to settle some difficulty which had occurred between them and some of our boys.
We had some rough fellows in our company, and upon the Pennsylvania boys making their appearance, at it they went. After a few rounds the intruders retreated. No one of our company was dangerously wounded; a few slight cuts about the head and ears included the whole list of casualties. Soon after this affair, I returned to my quarters and turned in, hoping to have a good night's rest. In about half an hour we were apprised of another visit from our neighbors. Out our boys rushed, crying Turn Out! Turn Out! Drive 'em! Drive 'em! At the same time, we could hear the clubs strike against the sides of our tents. Immediately after I heard Captain Hubbard rush along, and soon after the report of a pistol, one, two, three, followed by the report of a rifle, assured me that it was time to pull on boots and prepare for battle. Upon coming from my tent I found the tumult had subsided. Our lieutenant-colonel came along, we were all ordered to our quarters, and the guard being called upon, this fray, which promised something serious, was finally quelled. I did not hear that any one was seriously hurt.
The next morning, as I lay in my tent, looking out upon the street, a party of three or four stopped in for a talk. Soon one of them began to show symptons of a strange nature, and directly over he went upon his back. In connection with the affair of the past night, I began to think things were coming to a crisis. However, the man, who to all appeared dead, by dint of hard rubbing, applied by those gathered around him, was at length brought to and carried off."
Posted by John David Hoptak at 9:16 PM

Thanks for the blog. I enjoyed reading. I know this is a little off the subject but how did you like jersey? That is my home state. ;)

Jersey was cool, just a lot of traffic near Woodbridge/Rahway. . .