The Logan Guards was a militia company founded in 1858 in Lewistown, the seat of Mifflin County in central Pennsylvania. A public meeting held in August 1858 established the constitution and by-laws of the company and immediately thereafter John B. Selheimer was elected its captain.

The company was quickly organized and it was not long before it was brought up to strength. Company and squad drills were conducted nearly every night at the company’s headquarters, an unfinished brick building on Logan Street, which had originally been intended for a church, but was now converted into an armory and drill room. Assisting Selheimer and his lieutenants in drilling the recruits were two other militia officers from nearby areas: Captain Henry Zollinger of Perry County, who would later lead a company in the 49th Pennsylvania, and Captain William Irwin, a Mexican-American War veteran who held command of the Juniata Guards of Mifflin County. Irwin would later serve in the Logan Guards and rise to brigade commander’s rank in the Civil War.

Even before the firing upon Fort Sumter on April 12, 1861, Captain Selheimer offered the services of the Logan Guards to Governor Andrew Curtin, of Pennsylvania. On April 16, and in response to Lincoln’s first-call-to-arms, Curtin summoned the Logan Guards to Harrisburg. The company immediately responded and by the following morning, had arrived in the state capital where it was joined by Ringgold Light Artillery, National Light Infantry, Washington Artillerists, and Allen Infantry.

Together with these four other companies, the Logan Guards would march into history the following day—April 18—when they arrived in Washington, first in defense of the Union. They shared in the dangerous march through Baltimore, in which several of these Pennsylvanians shed the first blood of the war, and would spend their thirty-days’ term of service mainly at Fort Washington, along with Pottsville’s Washington Artillerists.

Near the end of July, the Logan Guards were mustered out of service and the men began their journey home. Private William McKay described the journey home: “Having been mustered out of the United States service and received our pay in gold, we astonished the citizens of Harrisburg by our soldierly appearance and exemplary conduct. We arrived home safely. The entire population turned out to receive us and we received a perfect ovation. The citizens and the ‘Slemmer Guards’ received us with all the honors, the members thereof being of the most respectable families. A bounteous and never-to-be-forgotten dinner was provided for us in the Court House, and speeches of welcome were made and responded to, after which we broke ranks and the old Logan Guards ceased to have an organized existence.”

Yet the war was just beginning. Most of the men who marched off to war with the Logan Guards reenlisted that summer of Summer of 1861 and many would go on to great laurels and distinction in the Civil War. Indeed, no less than thirty-three Logan Guards would rise to commissioned officers’ rank. Among the notable were Thomas Hulings, William Irwin, Joseph A. Matthews, and William Galbraith Mitchell, who would become one of Major General Winfield Scott Hancock’s most trusted aides.

The following is the roster of the Logan Guards, complete with a brief record of their subsequent wartime service. 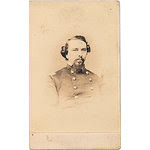 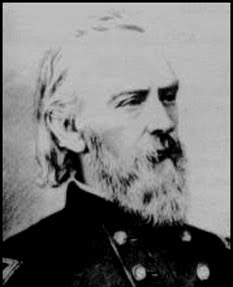 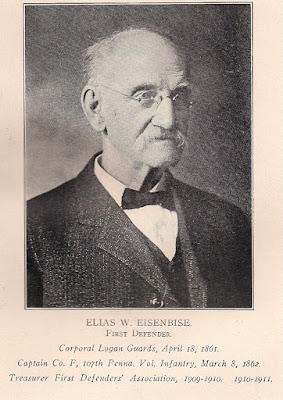 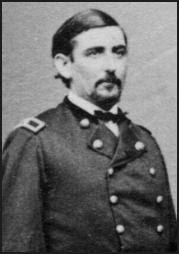 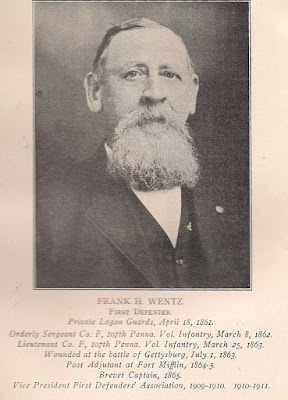 Posted by John David Hoptak at 6:28 AM