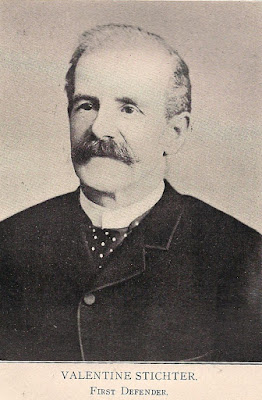 Left home on April 17th, 1861, with the company. Accompanied them to Reading, but, owing to certain circumstances had to remain over until next day. Satisfactory arrangements being made, advised Captain Wren, of following up next morning. Returned home, arranged matters and next morning telegraphed Captain James Wren, “On our way.”

Several other recruits, after finding out my intentions, desired to accompany me. We received the following transportation:
E.H. Wheeler, Esq.
Pottsville, April 18, 1861

Please pass over the P. & R. R.R. on to Washington City the following recruits, and charge the same to the Commonwealth of Pennsylvania, by order of the Hon. Eli Slifer, Secretary of State:
Valentine Stichter
Franklin Myers
Franklin B. Bannan
George A. Lerch

We left here on the morning of the 18th for Harrisburg, arriving there at five o’clock, and after a red tape delay of twenty-four hours to get transportation for Washington, D.C. from State officials, we became disgusted and concluded to forward our blue overcoats and baggage by express to Washington, purchase our own tickets and start for the capital, which we did at 1 o’clock P.M.

On approaching Baltimore the newsboys distributed a number of circulars, marked: ‘Extra—Riot in Baltimore with the Mass. 6th Regt.,’ etc. (Startling news for us on our mission). Having three hotels recommended to stop at and not knowing location of either, we chose the Maltby House.

On arrival at the city our cabman was obliged to drive us several squares out of our way, owing to some of the streets being occupied by the city military, called out to suppress the riot. Unpleasantly for us, as we thought afterward, that we had made that selection, for on arrival at the Maltby House and aligning from the cab, one of the first sights that met our eyes was a wounded man being by on a cellar door, a victim of the riot.

Entering the hotel, we found a very large room supported by cast iron columns. The whole floor seemed to be taken up with groups of men discussing the situation and outcome of the riot which had taken place that afternoon, giving vent to their feelings, to wit: ‘Three cheers for Jeff Davis’ ‘Damn the Northern Abolitionists’ ‘We’ll see whether any more of those (oath) will pass through here for Washington.’

We registered our names proper, which was in turn scanned by most of them. The eye of suspicion was cast upon us, our party at supper table noticed, eager to catch on to our mission. After supper enjoyed a smoke, and between nine and ten o’clock retired to bed for pleasant dreams, orders being given landlord to wake us in time to take the 4 o’clock A.M. train south. Fortunately, we thought (through a kind Providence) to enter cars next morning unmolested, but not forgetting that probably the forethought of sending our blue army coats by express from Harrisburg and not visible in our possession on that occasion was the means of saving our lives from an infuriated mob, and our bodies sent home in rough boxes. 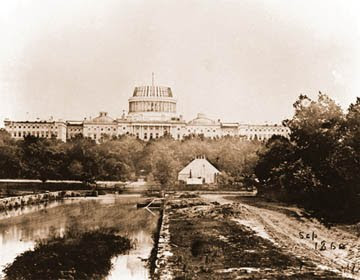 The U.S. Capitol Building During the Civil War. Stitcher and the First Defenders were initially quartered here upon arrival in Washington.

21—Sunday. On guard from Saturday evening, 7:30 o’clock until Sunday evening at 8 o’clock. Read a chapter in the Bible to comrades in the evening. A certain attack on the Capitol last night; all prepared; squads barricading the inlets and windows with flour, which was seized at Georgetown; 6000 barrels.
22—On guard for 7 hours’ shift.
23—Had a dress parade in the park. Trouble about our cooking arrangements. Moved quarters.
24—More troops arrived from New York, a regiment of 1000. Numbered the muskets today. On 24 hours’ shift guard at upper door. Flour seized by the U.S. Government, amounting to 7000 barrels, making it in all 13,000 barrels, with rice, coffee, and sugar. Visited John Pass at hospital.
25—Paid a visit to patent office and post office. Park parade; cheers given for our company. Gave Massachusetts regiment a serenade with the comb band. Longed to see friends at home. Package of letters arrived; none for me. Brown’s letter contained a few words from home.
26—Had dress parade in the park for three hours. Downtown and bought wearing apparel. Rhode Island and Massachusetts troops arrived; 1600. All well to-day. Seen President Lincoln and lady in Park. New York regiment sworn in.
27—In park, 1600 Pennsylvania troops arrived. Received shoes, blankets, etc.
28—Sunday. Chapter read out of Bible by Captain Wren. Prayer by Frank Myers. President Lincoln visited all the volunteers. Shook hands with him and Secretary Seward. Visited Long Bridge on guard from 7 o’clock last evening. Twenty-four hours’ shift. Preaching in the Senate chamber. Wrote letter home.
29—Parade in park three and a half hours. Squad went downtown to exchange shoes. Another Massachusetts regiment arrived. Report of an attack on the 5th of May.
30—Drill in park. Orders at 1 o’clock to proceed to Fort Washington; in half an hour all prepared for the march and on our way; 1.30 o’clock arrived at Navy Yard; boarded the steamer Philadelphia seized by the Government; passed Alexandria, Palmetto flag floating over the city; the dock was commanded by rebels with two brass six-pounders; prepared for an attack with 32-pound shells on steamer; arrived at Fort Washington 6.30 o’clock; packed in a small house with Logan Guards. 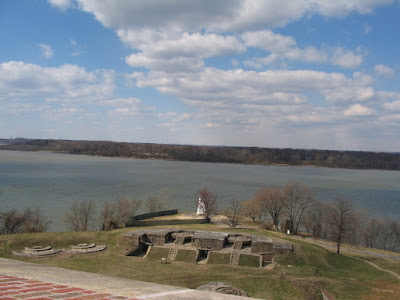 Fort Washington along the Potomac River, courtesy of The Marker Hunter.

1—Captain Wren resigned to run for Colonel. Trees all cut down. Mounted guns on water battery. Held an election, of which I was appointed inspector. Wren received 113 voted; opposite, 8.
2—Prepared for quarters in water battery. Put in floors and table. Steamer Kill Van Kull brought to by shot from the fort. Rhode Island troops on board. Moved quarters to water battery. On guard on Fort Heights from 8 P.M. till 8 A.M. Guard house in rifle battery. Quite cold. Very uncomfortable.
3—Great dissatisfaction among the men. Altered the sleeping bunks; made an upper tier. Rain to-day. Received a letter from Brother H.; one enclosed from wife and family; first one; much pleased to hear from home; all well. Meeting held by members about impositions. James Wren went to Washington.
4—Rain all day; remained inside.
5—Sunday. Inspection by Major Haskins at 9 o’clock. Bath in the river. Washed underwear, etc.; fresh shad for dinner.
6—Rain all day. On guard 24 hours. Appointed orderly sergeant for commanding officer of the day; 91 guards on duty to-day and to-night.
7—On guard at 8.30 o’clock. Received canteens and haversacks. Seized a vessel of corn.
8—Received 6 large guns, 24-pounders; lot of grape and canister shot, balls, etc. Provisions for 3 months. Twenty head of cattle engaged in hauling up cannon and mounting same.
9—Received five 8 and 10-inch colombiads for shell. Lot bombs, ammunition. Fresh beef for dinner. Radishes and pies for supper. Carried boards for officers’ quarters. On guard at rifle battery.
10—Rain. Unwell. Colonel H.L. Cake, Captain McDonald, and Messrs. Baber, Mattson, Geo. Patterson, Jas. H. Campbell and others visited here to-day. Got revolver.
11—Hauled up 32-pounders on foot; finished at 2 o’clock. Cleaned up for inspection. Steamer Jas. Guy seized.
12—Sunday. Inspection at 9 o’clock. Army rules read at 10. Received Government uniforms; distributed them. Clothes vermin discovered in camp. Troops passed for Washington.
13—Received 2 barrels eggs and barrel butter of Morris. One barrel eggs of Nichols & Beck. On picket guard. Battle with cattle. Rain.
14—Wrote a letter to family. Cleaned musket. Nothing new to-day.
15—On the main guard 24 hours. Potatoes for supper.
16—Came off guard. Wren’s resignation accepted. Haywood and Huntzinger paid us a visit. All well at home.
17—On police duty.
18—On fatigue duty. L.C. Thompson, W. Patterson and Mr. Garrisgues paid us a visit. Unloaded a steamer with provisions.
19—Sunday. Wrote to wife and father. Inspection at 9 o’clock. On picket guard. Report of Washington’s bones being removed to Kentucky.
20—Rain all day. Packed box with clothes to send home. Living on luxuries, ham, dried beef, pickles, sweitzer cheese, etc.
21—On fatigue duty. Commenced Hardee’s drill. Fired bomb shell up the river from fort. Dragged trees for south side of parapet walls for barricading.
22—Wash day. On picket guard.
23—Came off picket guard. Cleaned my gun.
24—Went on main guard. Appointed orderly sergeant under Captain Perkins. Alexandria taken by the Zouaves. Col. Ellsworth killed. Heavy cannonading through the night. Harper’s Ferry and Arlington Heights taken possession of.
25—Came off main guard. Thirty-five rebel pickets captured near Alexandria. Captain of Pawnee court-martialed from giving false signals.
26—Inspection at 8.30 o’clock. Wrote two letters and received one. All well at home. Weather very warm.
27—On rifle battery guard. On police duty.
28—On fatigue. Shad fishing ended. Fired 11 guns for death of sergeant. Flag at half-mast at fort. Received letter from wife.
29—On long guard. Appointed orderly for officer of the day. D.A. Smith received letter from Brother H. Families well cared for at home.
30—Came off guard. Luxuries arrived for members. Game of ball.
31—Monthly inspection of all the troops in fort. Steamboat loaded with ladies from Alexandria for Piscatawa. Rumored engagement at Alexandria in a few days. Nine ladies arrived here to-day. A ball held in our old quarters by all the officers in the fort with the ladies. 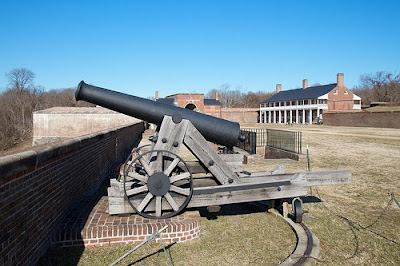 Interior of Fort Washington, courtesy of Civil War Trust.
Posted by John David Hoptak at 8:35 AM