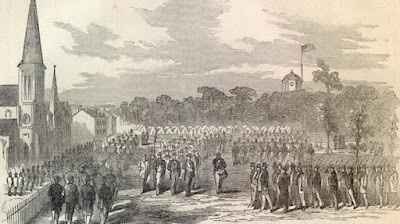 Dave Maher is a good friend of mine, who I have come to know over the past few years through his volunteer work at Antietam National Battlefield. One thing I discovered early about Dave was his passion for the study of the American Civil War and his dedication to historical preservation. A native of New Jersey, Dave currently resides near Harrisburg where he works with the Pennsylvania Historic and Museum Commission. Dave's main interest lies with his beloved Irish Brigade; recently, however, he has focused his attention on a little-known, though important, Civil War topic: the Pennsylvania Militia Men of 1862 & 1863.

In the late summer of 1862 and then again in June-July 1863, Pennsylvania Governor Andrew Curtin raised a call for volunteer militiamen in response to Confederate General Robert E. Lee's two invasions of Union soil, and the men from across the Keystone State responded in great numbers. Tens of thousands turned out to add their names to the rosters, and though they were the subject of much derision from the Union high command, their role was an important one and their service noble. Indeed, many of those who composed the Pennsylvania militia units in the summer of 1863--and who served during the Gettysburg Campaign--were recently discharged "Nine-Month" men from such hard-fighting units as the 125th, 129th, 130th, 132nd Pennsylvania, and so on. My own native Schuylkill County also furnished several of these militia companies, notably the 39th Pennsylvania Militia, a regiment raised by none other than Brigadier General James Nagle, who had just returned home from the army, following his resignation because of heart disease. Upon arriving at Harrisburg, General Darius Couch, commanding the Department of the Susquehanna, named Nagle a brigade commander.


The story of these men's experiences has long needed to be told, and Dave is certainly the right guy to do it, for he will give them due justice. Several weeks ago, Dave launched a blog titled Pennsylvania's Emergency Men, and so far, his posts have been simply outstanding. As Dave writes, his blog is "A look back at the the Pennsylvania Emergency Militia, and the Keystone state's reaction and response to the threatening advance of, and later invasion by, the Confederate Army of Northern Virginia during the Maryland Campaign of September 1862, and the Gettysburg Campaign of late June and early July 1863. As well as other historical thoughts and observations."


I have added Dave's blog to the blogroll on the right, and I am hoping you, too, will make it a regular stop on your daily Civil War blog reading list. Pennsylvania's Emergency Men can be found here. 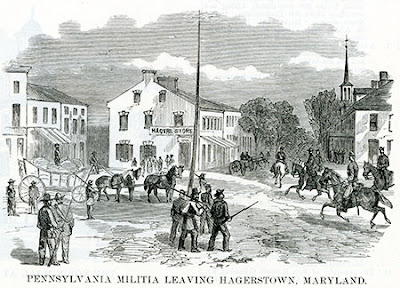 Posted by John David Hoptak at 7:02 AM