Before the Crater: The 48th Pennsylvania at Petersburg: (Part 4): The Death of Lieutenant C.C. Pollock 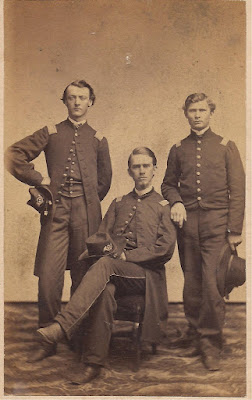 Curtis Clay Pollock, [standing, left] was just nineteen years old when he enlisted as a corporal in Company G, 48th Pennsylvania Volunteers, in the late summer of 1861. But for the young man, who put his life on hold that year to serve the nation, this would already be his second enlistment. In April 1861, Pollock was one of the first to volunteer his services to the Union, leaving Pottsville as a member of the Washington Artillerists and marching into the nation's capital on the night of April 17 as a "First Defender." With the 48th, Pollock advanced rapidly through the ranks and ultimately became a first lieutenant.

Throughout his time in uniform, Pollock wrote frequently to his parents in Pottsville, asking for newspapers, edible treats, and even money every now and then, while at the same time commenting upon the weather conditions, asking about loved ones at home, narrating the regiment's movements, and describing the best he could the regiment's battles. His final letter was written on June 12, 1864, from "Near Coal Harbor about 10 miles from Richmond."

Five days after penning this, his last letter home, Pollock, who always led from the front, fell seriously wounded during the attacks on Petersburg. Carried from the field and taken to Washington, Pollock died on June 27, 1864. His family had his remains transported back home to Pottsville, where they were laid to rest in the Charles Baber Cemetery.


William and Emily Pollock, Curtis's parents, received no more letters from their son. But in mid-July one did arrive from 1st Lieutenant Thomas Bohannan; another reached the family in early August penned by Sergeant Henry Krebs. Both were good friends of Curtis, and their letters described the death of the Pollock's brave son.

Mr. Pollock
Sir
This morning I turned over your sons valise to the Agt of the Sanitary Committee. He promised me he would deliver it to the Express Office at Washington, D.C. It is in safe hands and I hope you will receive it in good order. I would have forwarded it before the present time but the difficulty was that there has not been any Express Office established here as yet.
I was very much surprised in hearing of Lieuts death. The morning he arrived at City Point from the battle field he sent the ambulance driver to inform me of his accident. My quarters are ½ mile from City Point. I went immediately to see my particular friend as I must say he was a favorite young man in the Regt and a brave soldier.
On my arrival at City Point the Ambulance Corps was preparing to have him carried on board the boat to be sent to Washington. I took him by the hand and asked him if his wound was dangerous. He seemed to think not and appeared to be very much pleased that his wound was not more serious. As soon as he was placed in a bunk on board the steam boat, I sat down and spoke to him a few minutes. He then requested me to get him his valise but at that time I was not able to get the valise as I had placed all the baggage belonging to officers of the Regt on board a barge at the White House to be sent around to City Point by water. The barge had not arrived at the time.
I bid the poor fellow good bye but not thinking at the time nor him either that it was our last fairwell with each other. I hope he has gone to a happy home. I must come to a close by sending my kindest regards.
Yours Respectfully
Thomas Bohannan
1st Lt.
48 Penn v vol

Mr. Pollock—
Dear Sir:
Lieut. Bohannan having a press of business he has requested me to answer for him your letter asking for information concerning Curtis’ valise and other effects. Enclosed you will find the address (obtained from the Agent of the Sanitary Commission at City Point) to which the valise was sent, which I trust will enable you to get it, if it has not yet reached you.
Serg’t Jones, (now Lieut) of Company “G” thinks that his pistol must be in the valise.
Serg’t Aumen (now Lieut) Company “G” was near Curtis when he was wounded and assisted him from the field. He states that he was quite cheerful and in good spirits, though he suffered considerable pain. One of the his first expressions was “Wasn’t that a splendid charge ?”
After he had walked some distance he said he felt faint and sank to the ground ere Lieut. A. could catch him. He soon revived and walked assisted by Lieut. A. to the Field Hospital.
A few hours after he was taken in an ambulance to City Point. Lieut. Bohannan met him on the road. He spoke cheerfully and requested him to send his baggage home. He seemed to think his wound was slight, and that he was very fortunate in escaping so well, without the loss of a limb as there were many around him. Two hours ride brought him to City Point, where there was boat in readiness to receive the wounded and as soon as she was loaded she started for Washington.
The baggage of our Corps was sent by water from White House and only arrived the day he left or it could have been sent with him. There is an overcoat with the Company baggage which was just discovered a day or two since. Lieut. Bohannan will see Major Bosbyshell about it, and if it is Curtis’ will send it by express.
The writer of this will see Lieut. Aumen and see if he has any additional particulars, he will, no doubt, be pleased to give them.
All the members of the Company and of the Regiment unite in the highest praise of his bravery and courage in battle as well as his example as a friend and companion. His death and the of Lieut. Jackson has cause a deep feeling of gloom and sadness to pervade Company “G” which will not easily be dispelled. They will live long in the memories of those who knew them to love and respect them.
Trusting that the condolence of a friend and former member of Company “G” is not here out of place, I beg to subscribe myself.
Very Respectively Yours,