The 48th/150th: Becoming A Regiment & Receiving Its Flags 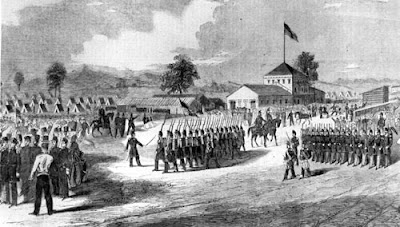 
One hundred and fifty years ago, the 48th Pennsylvania officially became a regiment.

Organized during the summer of 1861 from throughout Schuylkill County, the volunteers--1,010 of them--rendezvoused at Harrisburg's Camp Curtin where, on September 20, 1861, the regiment was mustered into state service (they would then become United States soldiers of October 1, 1861).

The soldiers of the 48th were presented two stands of colors on that same September 20. One flag was presented by Governor Andrew Curtin--Pennsylvania's "War Governor"--which he presented on behalf of the state. Curtin, said regimental historian Joseph Gould, "made a very eloquent speech to the boys, and was heartily cheered at its close." Oliver Bosbyshell of Company G agreed, writing that "the glowing words of his speech made a deep impression upon the command."

The second flag--the National flag--was presented by John T. Werner, a Pottsville attorney, described by Gould as "a grand old patriotic citizen--one of those men whom it was a pleasure to know and be associated with." Werner's eighteen-year-old son, J. Frank Werner, was at that time serving in the ranks of Company D. By war's end, the young Werner, a clerk before the war, was the company's commanding officer. Werner traveled to Harrisburg and presented the flag on behalf of the grateful people of Pottsville. It was a silk flag and upon its blue canton was a fitting inscription: In The Cause Of The Union, We Know No Such Word As Fail.

Later that evening, an appreciative Colonel James Nagle wrote a letter for publication in Pottsville's Miners' Journal:
"I desire to acknowledge through your valuable journal, the receipt of a beautiful flag, forwarded and presented to my regiment by our fellow townsman, John T. Werner, Esq. We feel very grateful to him, and return our most sincere thanks for the beautiful National Flag he saw fit to present to us-the flag we all swore to protect and defend, and I have every reason to believe that the 48th will do its duty, knowing our cause is just."

Oliver Bosbyshell later proudly wrote that throughout the conflict these flags "were gallantly defended, and although shattered and torn by bullet and shell, were safely returned to the State. . . ."

The 48th would receive new stands of colors in 1864 to replace these first ones, which were, as Bosbyshell attested, torn and shattered by war.

Being mustered into service, the regiment received orders to depart Harrisburg on September 24, 1861. They were on their way to war. . . 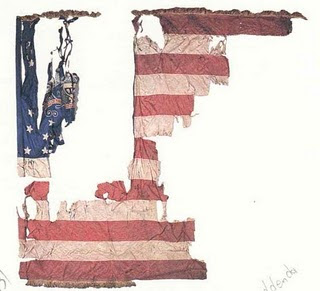 This is all that remains of the 48th's first "state" flag, presented to the regiment on September 20, 1861, by Governor Andrew Curtin. Despite its condition, it is still in much better shape than the regiment's first "national colors," by presented by John T. Werner, on behalf of the people of Pottsville. . . 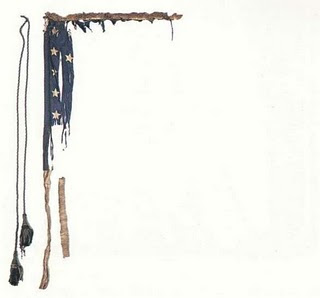 It is a real shame there is so little left of this. . .I would have loved to see that inscription:
In The Cause Of The Union, We Know No Such Word As Fail

Posted by John David Hoptak at 4:32 AM

Love this posting John. I suspect my GGgrandfather is John W Derr is somewhere in that picture and saw the flags you posted. Very exciting.