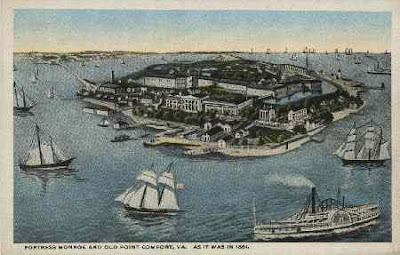 Having been mustered into state service, the soldiers of the 48th Pennsylvania received orders to proceed to Washington, D.C. Departing Harrisburg on September 24, 1861, the regiment boarded the cars of the Northern Central Railway and headed south. Along the way, Colonel James Nagle received a telegram directing him to instead take his regiment to Fortress Monroe.

Within just a few miles from Baltimore, "a fiendish attempt" was made to throw the train from the track but, as Joseph Gould noted, "Only two of the cars were thrown off, and beyond a few bruises, none of the members of the Regiment were injured."

At last reaching Baltimore, many members of Companies B & G who had passed through the Charm City in mid-April on their way to Washington as members of the Washington Artillerists no doubt recalled those tense moments when their small band came under attack by a mob of Confederate-leaning Baltimoreans. There would be no repeat of hostilities this time; instead, the 48th marched through the city to the harbor where they boarded the steamer Georgia, which Oliver Bosbyshell described as "a precarious old craft, likely to fall to pieces." Bosbyshell further recalled the nerve-wracking trip down the Chesapeake: "The captain wisely crept along close in to shore, not knowing what moment the timbers of the old hulk would separate. He was all anxiety, and his constant call admonishing to 'trim ship' kept the boys moving. The night moved slowly away, the somnolent regiment unmindful of danger, although ever and anon through its weary hours the cry of 'trim ship' caused a shifting of position."
The Georgia landed at Fortress Monroe on the morning of September 26. The 48th disembarked, stretched their legs, and marched around the walls of the fortress and across the narrow land bridge that connected to Hampton. There, they settled in at Camp Hamilton. "Here we settled down into a soldier's life," wrote Joseph Gould, "as naturally and contentedly as though we were old veterans."

In command of Camp Hamilton and Fortress Monroe at this time was an "old veteran," General Joseph King Fenno Mansfield, fifty-years-old with four decades worth of service. The soldiers of the 48th came to appreciate Mansfield, a professional soldier's soldier. "His mild disposition and benevolent heart, that caused him to be ever on the lookout for the welfare of his soldiers, combined, however, with a firm, just discipline," said Oliver Bosbyshell, "endeared him to all with whom he came in contact." 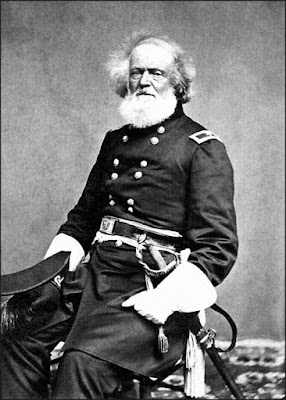 In an effort to demonstrate how easy it was to access the campsite of the 48th, Mansfield got into the habit of walking into the camp "night after night," each time dropping by Colonel Nagle's tent, letting him know that he was there. This surely embarrassed the colonel. "Day after day," said Gould, "while on regiment drill, Colonel Nagle formed the regiment in 'hollow square' and told of Mansfield's nocturnal visit to his quarters. He was greatly displeased at this seeming lack of vigilance on the part of the guards, and demanded greater care by officers and men; but the nightly invasions continued, though not so frequently."

During one of Mansfield's visits, he was able to slip past Private Jake Haines, who was on guard duty, without challenge. Mansfield instructed the officer of the guard to have Haines reprimanded, but Haines, as Bosbyshell described him, "was as deaf as a post," which most likely accounted for his lack of vigilance. Colonel Nagle understood and though he did reprimand Haines, he did so in a "low squeaking voice which the Colonel sometimes adopted." Nagle walked away and Haines turned to a comrade and asked, "What did he say?"

At last, Mansfield was stopped one night trying to get into the 48th's camp; a soldier named Rogers yelling to the aged warrior, "halt, or I'll prog ye!" Rogers, with bayonet forward, escorted Mansfield to the Officer of the Guard, who then walked with Mansfield to Nagle's quarters. There, Mansfield at last congratulated Nagle and his regiment. "This episode," summarized Gould, "occurring in the formative period of the regiment, the impression remained, and vigilance on camp and picket guard became a marked characteristic of the command. . . ."

Less than one year later, on September 17, 1862, General Mansfield was struck down with a mortal wound while leading the Twelfth Corps at the Battle of Antietam.

Posted by John David Hoptak at 5:16 AM

Great Mansfield story which I will have to use in my Mansfield book. In addition to Gould's history of the 48th what were your other sources?