A "Brave and Most Gallant Soldier:" Lewis Martin--First Defender and Major, 96th Pennsylvania Infantry, Killed in Action at Crampton's Gap 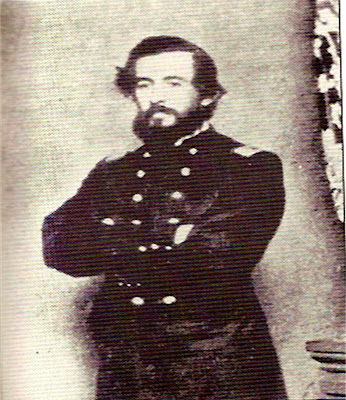 Lewis Martin was among the first volunteers for the Union. A civil engineer, he was elected surveyor of Schuylkill County just a few years before the outbreak of the Civil War in the spring of 1861. Highly esteemed by the people of Pottsville, Martin was thirty years old. In 1859, he married Minerva Smith of Hamburg, PA, and the young couple was soon blessed with two baby boys. Minerva was pregnant with their third child when her husband marched off to war in April 1861. Martin was a member of the National Light Infantry, a Pottsville militia company formed in 1831. On April 11, 1861, one day before the war's opening salvos rang out over Fort Sumter in Charleston Harbor, South Carolina, the National Light Infantry wired Secretary of War Simon Cameron to offer the services of the company should they be needed. Cameron responded by ordering them to Washington. In 1868, Cameron acknowledged that the National Light Infantry was the very first company of northern volunteers to offer its services to the Union. When on April 18, the National Light Infantry, along with the Washington Artillerists (also of Pottsville), the Ringgold Light Artillery of Reading, the Allen Infantry of Allentown, and the Logan Guards of Lewistown, arrived in Washington, they were the first northern volunteers to reach the capital, and thus went down in history as the First Defenders.

Lewis Martin wrote frequently to his family in Pottsville, especially to his mother. On April 28, just ten days after arriving in Washington, Martin wrote: "It is possible as I have before acknowledged that I did very wrong in leaving home under existing circumstances. I can hardly convince myself that I did not then. . . . True it may be said I owe a duty to my family which is paramount to that of any other worldly one, but what if all would make use of the same argument[?], who would there be to rescue the honor of Our Country and its flag, which when dishonored, dishonors its People." Hoping to assuage any anxieties that he might be killed, Martin concluded that when he left home, he did so "with the firm conviction that I will see you all again, and I still hold on to it, and every day almost adds to my belief that it is not intended that we are going to engage in shedding the blood of our own countrymen." "I may be mistaken in the South," wrote Martin, "but I believe they are not going to rush much farther in their suicidal course, for they certainly did not bargain for the Union of sentiment they now find in the North, and with which they are bringing themselves in contact."

When the three month terms of service of the National Light Infantry expired in late July 1861, Martin and most of the members of the company reenlisted to serve a three-year term. This time they were mustered in as Company A, 96th Pennsylvania Volunteers. Lewis Martin was their captain. Promoted a short time later to major, Martin survived the deadly battles of the Peninsula and Seven Days' campaigns. Martin continued to send a steady stream of letters home (which are currently in the collections of the United States Military History Institute in Carlisle, Pennsylvania). With the regiment encamped near Washington in early September 1862, Martin's mother decided to pay her son a surprise visit. Sadly, what she did not know was that the 96th was, by the time she arrived, already on the move. . .marching westward through Maryland in pursuit of Robert E. Lee's invading Army of Northern Virginia. She traveled as far as Rockville, hoping to see her son, before making the long journey back home to Pottsville. Learning of his mother's attempt to see him, Martin wrote on September 11, "I could scarsely realize it when first told to me and have not yet fairly gotten over it. I did not have the remotest idea that [she] would come on or I would have telegraphed on Saturday that we had received marching orders. . . .I am really too sorry but I do not want to discourage you from making another attempt." Sadly, Mrs. Martin would never have an opportunity to make "another attempt." This was Martin's last letter home. Three days later, he was killed while leading a charge against the Confederate defenses of Crampton's Gap during the battle of South Mountain.

His loss saddened the regiment, particularly his commanding officer, and good friend, Colonel Henry L. Cake. On September 15, Cake sat down to write a heartfelt letter to Lewis's mother: 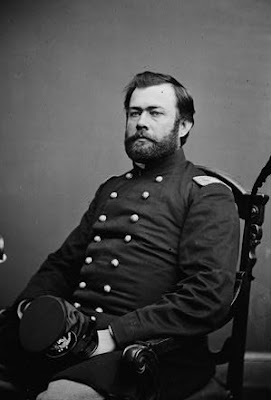 My Dear Mrs. Martin~
How shall I fulfill the harrowing duty that is mine? At the 'storming of Blue Ridge,' seven miles from Harper's Ferry, I lost my brother, friend, constant companion--the bravest and most gallant soldier of the regiment--my Major. The country has lost a soldier, I a friend, but oh, who can describe your loss? He spoke of his mother continually--and of his little son, who must now be your consolation and your care. His disappointment at not meeting you was extreme.

It was just at the moment of the most complete victory. The 96th had again covered itself with what to me is horrid glory when we felt the extreme danger past that he received his death wound. Adjt. Geo. G. Boyer was near him, and reports him hit five minutes before six, and that he ceased to breathe at ten minutes past six. He never spoke, was unconscious, and did not suffer. Mr. Boyer removed him from the field with his own hands. I have had a coffin made, will send him to Washington to be embalmed, and thence to Pottsville, consigned to R.J. Weaver. Break the news to his poor wife. It breaks my heart to be compelled to communicate it to you.

The storming of Blue Ridge will be memorable, and will render memorable Sunday, the 14th Sept. 1862. It is seven miles from Harper's Ferry, near the village of Burkittsville, Md. It was here you laid your sacrifice upon the altar of your country. It was. . .all you had to give--a brave, good soldier.
The 96th suffered severely, losing not less than 150 in killed and wounded.
I need to add how much I sympathize with you and your daughter--my own grief is extreme. Believe me, dear madam
Your most devoted friend,
H.L. Cake

The remains of Lewis Martin arrived home on Wednesday, September 17, 1862. At the same time, one hundred and fifty miles away, Americans were once again killing each other by the thousands along the banks of the Antietam Creek. Thousands of mourners lined the streets of Pottsville, flags flew at half-staff, and business was suspended throughout the city, as Martin's body was carried to its final resting place in the Presbyterian Cemetery. 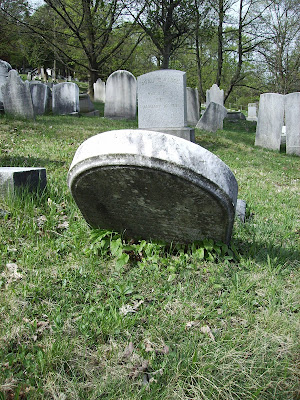 The Grave of Major Lewis Martin. . .
Today is nearly toppled over.
Posted by John David Hoptak at 6:51 AM

Thank you for the really great article. I have a question for you - are you certain regarding the year he married Minerva Smith? Could it have been 1858? I ask because his son William was born in 1858. Is there anyway you can find the answer? Thanks