Portrait of a Regiment: Ethnicity. . .

Because volunteer Civil War regiments were typically recruited from the same geographic area, we learn that these regiments were an extension of their native communities. A look at the ethnic composition of the 48th Pennsylvania, helps to reinforce this notion. 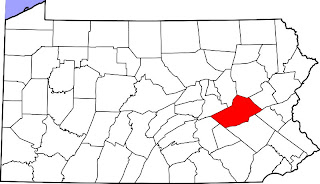 Located in east-central Pennsylvania, Schuylkill County was home to the vast majority of soldiers who served in the 48th Pennsylvania. In 1860, the total population of the county numbered 89,510 men, women, and children. Almost 30% of this number, or some 26,267 persons, were foreign-born. Remarkably, in my sample study of the 48th Pennsylvania, I found that 29.1% of the regiment were foreign-born: almost an identical percentage. There are some variations, however, when we look at the percentages of each of the major ethnic groups in the county and in the regiment.

An estimated 35% of Schuylkill County's foreign born were German, while another 35% were either English or Welsh. Irish immigrants constituted 25% of the county's immigrant population. In the ranks of the 48th PA, throughout the four years of its existence, we find that of the foreign-born soldiers, 31.3% hailed originally from England & Wales, just slighlty below the county percentage. However, those in the regiment of German nativity comprised just 18% of the foreign-born soldiers, while the Irish constituted 36%, substantially higher than the county average. What accounts for this disparity in the percentage of German and Irish born soldiers?

It most certainly is due to the areas of enlistment. Five companies of the 48th PA were recruited from Pottsville, the county seat, while another was formed in Minersville. Company E was filled with soldiers from the Silver Creek/Middleport area. All of these areas were largely coal-mining communities, where the Irish were more inclined to settle. German immigrants to Schuylkill County tended to settle in the county's agricultural areas, where only two companies of the 48th drew most of its recruits. If one was to do a study of the ethnic composition of the 96th PA and 7th PA Cavalry, two units that were also Schuylkill County-based, they would probably find the percentage of German born soldiers to be higher, and the percentage of Irish soldiers to be lower, than in the 48th, for these regiments drew more heavily from the county's agricultural areas. 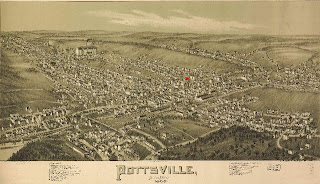 Five of the 48th's ten companies were recruited from Pottsville, the County Seat

Now, let's take a closer look at these numbers and statistics. Remember:

-Schuylkill County's Foreign-Born population in 1860 was 30%; the percentage of foreign born soldiers in the 48th PA throughout the war was 29.1%

-35.6% of the soldiers who were mustered into service during the last two years of the war, 1864-1865, were foreign born, almost six percentage points higher than the regimental average. Most of these soldiers, nearly 40%, were Irish, while only 25.2% were English/Welsh. Why such a big difference? See below. . .

-The draft seemingly hit harder among Schuylkill County's foreign-born population. Indeed, of the soldiers who entered the regiment as conscripts, 54.5% of them were not born in the United States. In addition, of the soldiers who entered the ranks in place of someone else, i.e. substitute soldiers, 60% of them were foreign-born. Those hailing from Ireland represented the highest percentage of these foreign-born troops. These numbers certainly do tell a story.

-Of the regiment's commissioned officers, 75.9% were born in America, while the other 24.1% were foreign-born, just 5 percentage points below the regimental average of foreign-born soldiers. Interestingly enough, 35% of the foreign-born commissioned officers hailed from England; another 35% from Ireland. From these numbers, one cannot say that an individual's nativity bore an influence on whether he served as an officer, at least not in the 48th.

4. Soldiers Who Died of Disease:

-As the percentages show, there was no correlation between a soldier's place of birth and his likelihood of succumbing to disease: 28.6% of those who died of disease were foreign-born, an insignificant .5% below the percentage of foreign-born soldiers in the regiment as a whole.

-Last category. . .Were foreign-born soldiers more likely to desert? Well, it's tough to say for certain, but the numbers indicate that they were. Indeed, 50% of the regiment's deserters were of foreign-birth, significantly higher than regimental percentage of foreign-born soldiers (29.1%). However, as mentioned in previous posts, desertion was probably more influenced by a soldier's age and whether or not he was married. Most desertions in the 48th took place in 1864-1865, when the regiment was increased with the addition of conscripts and substitutes, who were on average much older, more likely to be married, and, and stated above, largely foreign-born.

So, what does all this mean? It is clear that the 48th was a diverse regiment, with nearly 30% of the regiment being foreign-born. Most of these soldiers were natives of either England, Wales, or Ireland, while not a small number hailed from Germany. Scots, too, comprised a large percentage. The higher percentage of Irish soldiers in the regiment, compared with the county-wide percentage, was due to the areas of highest recruitment: 7-8 companies of the regiment drew its members from the coal mining and more urbanized areas of Schuylkill County, where Irish settlers were more inclined to settle and find work in the antebellum years.

Place of birth may have played a role in whether or not a soldier deserted, with 50% of the regiment's deserters being of foreign-born. However, we must also look at age and marital status as well. Nativity was not the sole cause of desertion.

Finally, ethnicity seemingly played no role in the composition of the 48th's commissioned officers.

Posted by John David Hoptak at 7:02 AM