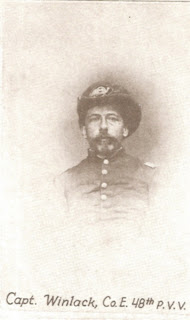 Born on September 9, 1826, in Londonberry, Ireland, William Winlack received very little formal education as a child, but was instead put to work at a young age on his family's farm. Seeking a better life for himself, Winlack, at age sixteen, set sail for America, arriving in New York City on August 30, 1843. He migrated to Schuylkill County, Pennsylvania, a short time later and was hired as a coal miner at the Black Heath mines. He paid close attention to mining operations and in time became an engineer, in charge of machinery at the mine. In 1854, and at just 28 years of age, Winlack became the superintendent of a colliery in Silver Creek, half-way between Pottsville and Tamaqua. While serving in this position, Winlack also formed a local militia unit, which he dubbed the Wynkoop Artillery. Serving as a lieutenant in this company was his good friend and coworker William Cullen.
When the Civil War broke out in April 1861, Winlack and Cullen were quick to offer the service of their company, which became part of the three-month 16th Pennsylvania Infantry. Upon the expiration of its three-month term of service, the Wynkoop Artillery re-enlisted, almost to a man, to serve for a three-year term, and was mustered once again into service, this time as Company E, 48th Pennsylvania Infantry.
Winlack commanded Company E for the next three years, seeing action in all of the regiment's battles during that time, including 2nd Bull Run, South Mountain, Antietam, Fredericksburg, the Wilderness, and Spotsylvania.
At Antietam on September 17, 1862, Winlack was leading his men forward when a Confederate artillery shell smashed through the ranks of Company E. Oliver Bosbyshell of Company G well remembered the effects of this one shot in his regimental history: "With a bang and a splutter along came that destructive old shell, which filled [Jacob] Douty's eyes with dirt, and bruised his shoulder, tore off Sergeant Seward's leg and left Sergeant Trainer minus one arm, as it drove the ramrod he was just replacing into poor Cullen's breast. Cullen jumped to his feet, tore open his shirt to show his captain the wound, and then dropped dead at Winlack's feet." 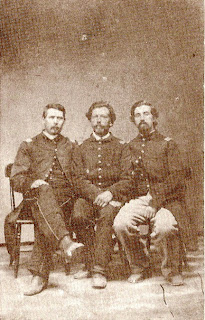 Captain Winlack, center, with Lieutenants Thomas Bohannan (left) and Joseph Fisher (right)
During the siege of Petersburg in mid-July 1864, as the 48th tunneled under the Confederate lines, Colonel Henry Plesants was fearful that Confederate troops had gotten word of their operation and were engaging in counter-mining, trying to locate the 48th's tunnel. Thus, late on the night of July 17, with the main gallery completed at some 511 feet, Pleasants awoke Captain Winlack, himself a mining man, and with another soldier, the three crawled the length of the mine. "Lying down with every sense alert, in perfect darkness, and supreme quiet for a period of thirty minutes, until a low whistle, the intended signal, came from Pleasants, brought them together. . ." Pleasants whispered in Winlack's ear: "What do you think about any counterboring?" Winlack whispered back: "The rebels know no more of the tunnel being under them than the inhabitants of Africa." "That's just what I believe," answered Pleasants, and the three men crawled their way back out. Of course, some Confederates were aware of the tunnel, including General E.P. Alexander, who did indeed order a number of counter-mines dug. All of them, however, were too high to discover the 48th's mine.
Winlack was discharged from the army on August 21, 1864, his three year term of service coming to an end. He settled in Coaldale, Pennsylvania, after the war and served as postmaster for a number of years. He died on June 6, 1907, in Coaldale, at 80 years of age. 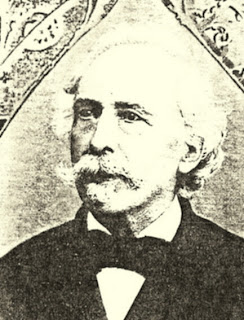