"The Grave of Nick Biddle"

In my previous post, I focused on the life of Nicholas Biddle, seen by many as the first casualty of the Civil War. Despite this, it is interesting that he has remained almost forgotten in the vast annals of Civil War historiography.
Upon Biddle's death in 1876, Chaplain James M. Guthrie composed a poem entitled "The Grave of Nick Biddle," an absolutely fascinating piece. Guthrie, in his poem on the life of Biddle, explored also the true meaning of the Civil War, and I think captured it perfectly, certainly far better than I can ever hope.
Please take a few moments to read this poem and think about its meaning. It still bears much relevance. . . 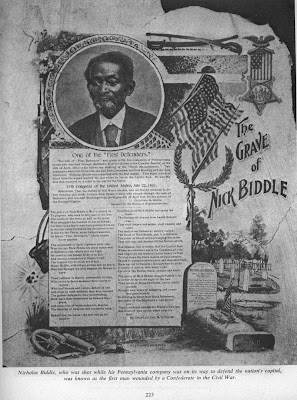 The Grave of Nick Biddle:
By Chaplain James M. Guthrie

The grave of Nick Biddle a Mecca should be
To Pilgrims, who seek in this land of the free
The tombs of the lowly as well as the great
Who struggled for freedom in war of debate;
For there lies a brave man distinguished from all
In that his veins furnished the first blood to fall
In War for the Union, when traitors assailed
Its brave “First Defenders,” whose hearts never quailed.

The eighteenth of April, eighteen-sixty-one,
Was the day Nick Biddle his great honor won
In Baltimore City, where riot ran high,
He stood by our banner to do or to die;
And onward, responsive to liberty’s call
The capital city to reach ere its fall,
Brave Biddle, with others as true and as brave,
Marched through with wildest tempest, the Nation to save.

Their pathway is fearful, surrounded by foes,
Who strive in fierce Madness their course to oppose;
Who hurl threats and curses, defiant of law,
And think by such methods they might overawe
The gallant defenders, who, nevertheless,
Hold back their resentment as forward they press,
And conscious of noble endeavor, despise
The flashing of weapons and traitorous eyes

Behold now the crisis—the mob thirsts for blood:-
It strikes down Nick Biddle and opens the flood—
The torrents of crimson from hearts that are true—
That shall deepen and widen, shall cleanse and renew
The land of our fathers by slavery cursed;
The blood of Nick Biddle, yes, it is the first,
The spatter of blood-drops presaging the storm
That will rage and destroy till Nation reform.

How strange, too, it seems, that the Capitol floor,
Where slaveholders sat in the Congress of yore,
And forged for his kindred chains heavy to bear
To bind down the black man in endless despair,
Should be stained with his blood and thus sanctified;
Made sacred to freedom; through time to abide
A temple of justice, with every right
For all the nation, black, redman, and white

The grave of Nick Biddle, though humble it be,
Is nobler by far in the sight of the free
Than tombs of those chieftains, whose sinful crusade
Brought long years of mourning and countless graves made
In striving to fetter their black fellowmen,
And make of the Southland a vast prison pen;
Their cause was unholy but Biddle’s was just,
And hosts of pure spirits watch over his dust.

Posted by John David Hoptak at 7:52 AM

Love your attetion to detail and this poem cannot come at more opportune and appropriate time in my own personal research.
Dr./Professor Neil Garland
DrRenShen@comcast.net

Do you know where the actual grave marker/burial site is?

Biddle's burial site is in a very small cemetery in Pottsville, PA off of Laurel Boulevard.