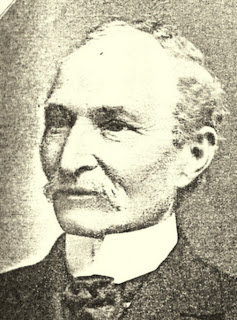 Patrick Monaghan was just ten years old when his family immigrated to the United States sometime between 1849 and 1850. Settling in Minersville, Schuylkill County, young Monaghan became a mine laborer. During the summer of 1861, twenty-one-year-old Monaghan enlisted into Company F, 48th Pennsylvania Volunteers and throughout the next four years rose to the rank of sergeant. Monaghan received three wounds throughout the course of the war, at Second Bull Run, the Wilderness, and at Petersburg, where his gallant and meritorious service earned him a Medal of Honor.
Before dawn on June 17, the 48th Pennsylvania attacked a portion of the Confederate lines surrounding Petersburg, catching the southern defenders completely by surprise. Hundreds and prisoners, a few cannon, and hundreds of small arms were captured by the 48th and their supporting regiments. Monaghan, seeing a handful of Confederates in full retreat, caught up with them and demanded their surrender. One of the fleeing Confederates was trying to escape with the flag of the 7th New York Heavy Artillery regiment, which was captured the previous day. Monaghan recaptured the colors, and for this was awarded the Medal of Honor on December 1, 1864. Major General George Meade personally handed the medal to Monaghan on December 16.
During their attack on June 17, the 48th PA lost seventy-five men killed and wounded, and it was also during this same attack that Sergeant Robert A. Reid captured the flag of the 44th Tennessee, which won him a Medal of Honor as well.
Sergeant Monaghan remained with the regiment until being mustered out in July 1865. After the war, he returned to Minersville and became active in the Pennsylvania National Guard, ultimately rising to the rank of lieutenant colonel. In 1873, Monaghan began his career in public education, which lasted until his retirement as superintendent of the Girardville Public Schools in 1916. He died the next year at the age of 77.
{Sources: "Patrick H. Monaghan, Medal of Honor Recipient," by Mark Monaghan; www.warscholar.com; photograph from Gould: The Story of the 48th.}
Posted by John David Hoptak at 7:05 PM

Thank you, this is a wonderful article. Patrick Monaghan was my great-great grandfather, and I've always enjoyed the stories about him throughout my childhood.

That is so amazing. He was my Great Great Grandfather as well! My Dad is Henry McDermott III.