A Walk Through Pottsville's Presbyterian Cemetery: Part One 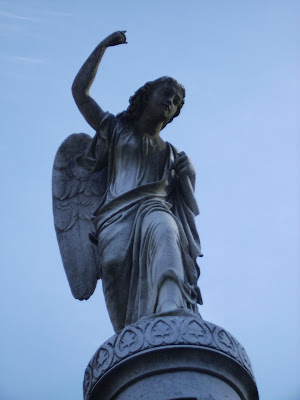 On a day off from work last week, I paid a visit to my parents in Orwigsburg and then spent the afternoon in Pottsville, walking through the Presbyterian Cemetery. Located at Twelfth and Howard Streets, the Presbyterian Cemetery is one of my favorite places to go whenever I have the chance to be in Schuylkill County. The cemetery has been closed to burials for quite some time it seems, and it is clear that not many people visit the graveyard on a regular basis. A good number of tombstones have shifted, fell over, or simply crumbled due to a combination of weather, erosion, and vandalism. This is a real shame, for within the gates of the cemetery lie buried scores of Civil War soldiers, many of whom gave their last full measure of devotion to the United States. A brigadier general, a few colonels, a Medal of Honor recipient, and an officer on General George H. Thomas's staff are all also buried in the Presbyterian Cemetery. I hope to someday develop a self-guided walking tour of the cemetery, which would be both educational and recreational, and which would hopefully attract more interest in and attention to this largely forgotten and overlooked graveyard. In the meantime, I decided, in a two-part blog piece, to post photos and stories of some of the Civil War soldiers buried in Pottsville's Presbyterian Cemetery.
JAMES NAGLE 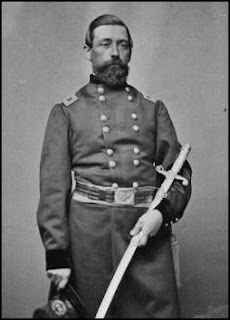 James Nagle, though born in Reading is arguably Schuylkill County's foremost citizen-soldier. At the age of 18, he organized the Pottsville Blues, a militia company that became the Washington Artillerists. Nagle led this company throughout the Mexican-American War, as Co. B 1st PA Volunteers. At the outbreak of civil war, Nagle was commissioned colonel of the 6th PA (three-months), and throughout the summer of 1861 organized the 48th PA. In April 1862, he took command of a brigade in General Reno's Division, 9th Corps, which he led at 2nd Bull Run, Chantilly, Antietam, and Fredericksburg. He resigned due to poor health in the spring of 1863, only to once again raise another regiment of volunteers, the 39th PA Militia, which he commanded during the Gettysburg campaign. In the summer of 1864, and in response to Confederate general Jubal Early's raid toward Washington, Nagle recruited and subsequently led the 194th PA Volunteers, a 100-Day unit. Mustered out for the final time in November 1864, Nagle died of heart disease on August 22, 1866, at the age of 44. More than 3,000 people mourned as Nagle was laid to rest in the Presbyterian Cemetery. 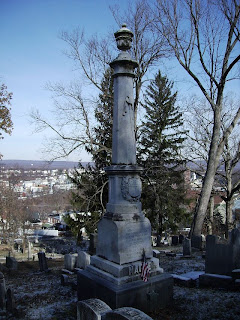 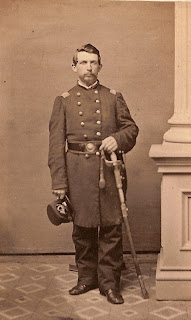 Buried next to his older brother James, Dan Nagle was born in 1828. He served with his brother in Mexico, and formed the Nagle Guards at the outbreak of the Civil War in April 1861. When the 48th PA was organized, Dan recruited Company G, and was mustered in as its captain. In November 1861, Dan Nagle was elevated to the rank of regimental major, a rank he held before resigning in July 1862 to take command of the 173rd PA. After brief service in the 11th Corps, the 173rd was mustered out of service in August 1863. Daniel Nagle lived the longest of the five fighting Nagle brothers. He died in January 1918 at the age of 89. 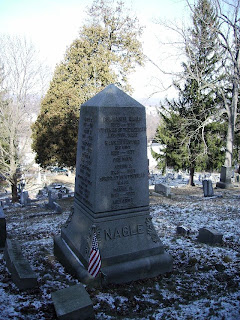 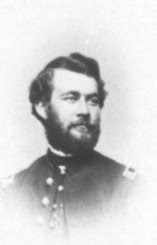 Robert H. Ramsey was a Philadelphia businessman, but in the summer of 1863, as General Lee's Army of Northern Virginia crossed into Pennsylvania, Ramsey volunteered his services and was mustered in as a lieutenant in the 45th PA Volunteer Militia. After the defeat of Lee's army at Gettysburg, Ramsey's regiment was sent to the coal fields of Schuylkill County to help quell the draft rioting that had broken out. Ramsey remained in Pottsville until early 1864, serving as the acting Adjutant General on the staff of Gen. William Whipple, commander of the Lehigh District. In February 1864, Ramsey was ordered to report to General George H. Thomas who he served as Acting Aide-de-Camp and Assistant Adjutant General throughout the Atlanta Campaign and at the battle of Nashville in December 1864. Thomas recommended Ramsey for promotion to Major, which was made, and before war's end, Ramsey was brevetted a lieutenant-colonel and colonel. Sadly, and quite suddenly, Colonel Ramsey died in 1876 in Nashville, at the age of 38. His body was brought back to his adopted home of Pottsville, where he was buried. 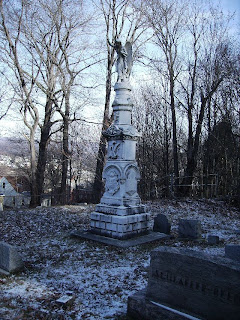 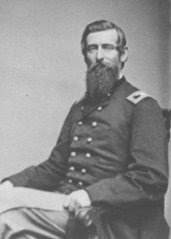 Born on January 25, 1825, in Northumberland County, PA, Jacob Frick served as a lieutenant during the Mexican-American War, and after his service here, spent the next several years training soldiers stationed at Fort McHenry. He resigned from the army and settled in Pottsville where he established a business that manufactured coal screens. When the Civil War broke out, Frick was mustered into service as the lieutenant-colonel of the 96th PA Volunteers, and through his training, helped mould this unit into one of the best that served in the Army of the Potomac. Frick resigned from the 96th in 1862 to become the colonel of the nine-month 129th PA Volunteer Infantry. At Fredericksburg and again at Chancellorsville, Frick distinguished himself in the midst of terrible carnage. When his term of service expired in late May 1863, Frick returned to Pottsville, but was called upon once again a short time later to take command of the 27th PA Volunteer Militia. During the Gettysburg Campaign, Frick was stationed with his unit in Columbia, and on June 28, with Confederate General John Gordon's Brigade advancing toward the Susquehanna River, opposite Columbia, Frick set fire to the Wrightsville Bridge, which prevented the Confederate from getting across the important river. After the war, Frick returned to Pottsville where he died on March 5, 1902. Ten years earlier, on June 7, 1892, Frick received the Medal of Honor for his distiguished gallantry at the battles of Fredericksburg and Chancellorsville. At Fredericksburg, Frick led his regiment in an attack against Marye's Heights. As he advanced toward the impregnable Confederate position, Frick was thrown when a shell struck and killed his horse. Dusting himself off, Frick saw the color bearer of the 129th get shot down. He rushed for the flag. Moments later, the staff was split in half and the flag fell over Frick's shoulder. He continued to urge his men forward, but the attack was a failure. The regiment lost some 150 men killed and wounded, and Frick was himself wounded with shell in his thigh and right ear. Six months later, Frick's heroism was repeated at Chancellorsville. Here, Frick and his men were cut off and partially surrounded. Many members of the 129th surrendered, and a Confederate soldier captured the regimental flag. Frick would have none of this. Rallying his men, Frick charged toward the captured flag and, in hand-to-hand combat, wrestled it away from the Confederate soldier. 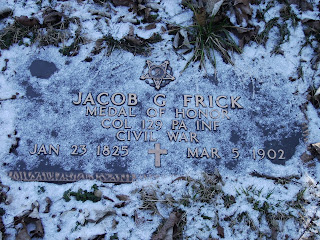 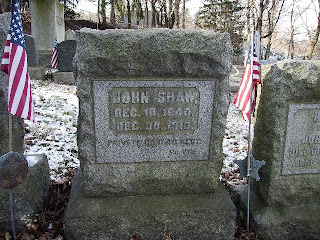 Of course, not all of the Civil War soldiers buried in the Presbyterian Cemetery were officers. Most of them, in fact, were privates and non-commissioned officers, such as private John Shaw. Born in December 1840, Shaw enlisted as a private in Company G when the company was organized in October 1861. Shaw, a "peddler" from nearby Port Carbon, served with the 48th until the late summer of 1862 when he was discharged on account of disability. He was wounded at 2nd Bull Run. Shaw passed away in 1913 at the age of 73. Twelve years before his death, his son, John Shaw, Jr., a private in Company H, 8th PA Volunteers during the Spanish-American War died at the age of 25. John Shaw Sr., was buried next to his son.
HUGH STEVENSON 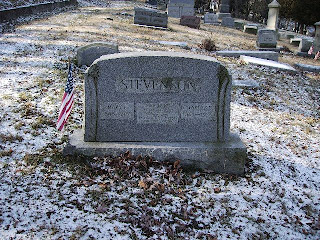 Hugh Stevenson, a member of the National Light Infantry, was a "First Defender." His company along with five others entered Washington on April 18, 1861, less than one week after the fall of Fort Sumter, and went down in history as the very first organized companies of northern volunteers to arrive in Washington after the start of the American Civil War. Stevenson reenlisted in the 96th PA, and was mustered out as 1st Lt., Company C.
DAVID B. BROWN In September 1861, twenty-year-old David B. Brown was mustered into Company H 48th PA Volunteers. The Pottsville baker served with distinction throughout the war and rose steadily through the ranks. On August 9, 1864, 2nd Lt. David B. Brown was killed by a Confederate sharpshooter near Petersburg, Virginia.
{Next week, I will post Part Two of "A Walk Through Pottsville's Presbyterian Cemetery"}.

Posted by John David Hoptak at 6:19 AM