Portrait of a Regiment. . . Ages 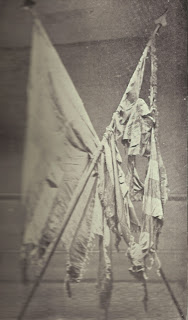 In 2003, I earned my master's degree in history from Lehigh University in Bethlehem, Pennsylvania. My master's thesis focused on the socio-economic backgrounds of Union soldiers, as well as an examination of the extent to which such socio-economic factors as age, occupation, income, ethnicity, et cetera, played a role in a soldier's wartime experience. As a case study for my research, I selected the regiment I knew best: the 48th Pennsylvania Volunteer Infantry. In order to be entirely accurate, I spent more than a year trying to match the soldiers with their census records from the 8th U.S. Census, conducted in 1860. Of the more than 1,800 soldiers who served for a time in the regiment, I was able to successfully locate, with 100% accuracy, 657 of these soldiers, or more than one-third of the regiment, to the census records, and I thus used this number as my statistical basis, believing it to be a fair sample.
I came across my notebooks from when I was working on my thesis, and figured I would share some of my findings with you. . .

*The Average Age of the soldiers who volunteered at the war's outset in 1861 was 23.6 years.

*The Average Age of those soldiers of the regiment who died of disease was 24.7 years.

*The Average Age of soldiers from the regiment who deserted was 28.2 years.

The soldiers who volunteered in 1861 averaged 2.7 years younger than those who were mustered in during the years of 1864-1865. This is partly attributable to the higher ages of those who entered the regiment as either conscripts or substitutes. It is in these two categories that we see the greatest difference in average ages. The drafted soldier averaged 5 years older than the volunteer, and the substitute averaged 4.65 years older than the volunteer.

These numbers get more interesting when cross-categorized with a soldier's marital status, income level, and ethnicity. . . In the weeks to come, I'll update this blog with more socio-economic information on the soldiers who served in the 48th. 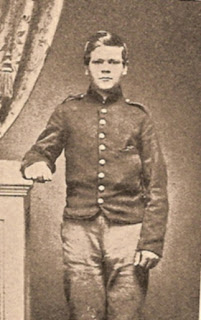 Samuel Beddall was just 17 years old when he enlisted as a private in Company E, 48th PA Vols. By the end of the war, Beddall was a sergeant and from October 1864-July 1865, he was the regimental color bearer. 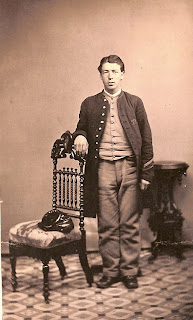 Theodore Pletz, a tailor from Middleport, was 22 years old when he enlisted as a corporal in Company I, 48th PA Vols. Wounded and listed as Missing in Action at the Second Battle of Bull Run, Pletz returned to the regiment and was mustered out as a "veteran" on July 17, 1865.
Posted by John David Hoptak at 8:04 PM

I stumbled upon this by accident and am so glad I did. I am interested in your books. At least 2 of my great-uncles were member's of the 48th regiment, from Minersville, PA: Sgt Charles Haines and Cyrus Haines. I have a copy Charles' Civil War Pension file. There's 100 years and 1 month between my grandfather's birth (in Minersville) and my own. Thank you, John.