I'm taking a step away from the 48th Pennsylvania this week to focus on the life of Colonel Benjamin Christ, with special focus on the role of his brigade at the battle of Antietam. Several weeks ago, I conducted an in-depth hike of the Final Union Attack at Antietam and spent most of this hike following in the footsteps of Christ's men as they made their way from the Burnside Bridge to the spires of Sharpsburg. I decided to focus on Christ during this hike for several reasons, but primarily because Christ is an overlooked and somewhat forgotten officer, and because the attack of his brigade has been overshadowed by the ill-fated attack of General Isaac Rodman's fellow 9th Corps troops on that September 17, 1862, afternoon.
* * * * * * * * * *

Born on September 12, 1822, Benjamin Christ was a native of Schuylkill County, Pennsylvania, and took up his residence in the town of Minersville. During the antebellum years, Christ served as sheriff of Schuylkill County and was also a hotel proprietor and coal merchant. When the Civil War broke out in April 1861, Christ enlisted as a private in the 5th Pennsylvania Infantry but due to his standing in the community, he was soon elected as the regiment's lieutenant-colonel. After the 5th Pennsylvania's term of service expired in July 1861, Christ helped raise and organize the 50th Pennsylvania, a "three-year or the course of the war" regiment and was mustered into service as this regiment's colonel. Christ commanded the 50th PA during the expedition that led to the capture of Port Royal, and in the winter of 1861 nearly lost his life in a shipwreck off the South Carolina coast. When the 50th was transferred to Virginia in the summer of 1862, Christ was elevated to brigade command in the Union 9th Corps. He would command this brigade for most of his remaining time in the army but despite this, he never advanced beyond the rank of colonel. He was, however, brevetted a brigadier general of volunteers late in 1864, following his resignation, for distinguished and meritorious service at the battles of Ny River and Petersburg.

Christ's Brigade--consisting of the 50th Pennsylvania, 28th Massachusetts, 79th New York, and 17th Michigan--saw considerable action and suffered significant casualties at the battles of 2nd Bull Run, South Mountain, and Antietam. On the morning of September 17, Christ and his men were held in reserve east of Antietam Creek, and remained in this position until 2:00 p.m. when they, along with the rest of General Orlando Willcox’s 9th Corps Division, were ordered across the Lower, or Rohrbach Bridge. Taking up position on the right of the 9th Corps line, Christ’s men advanced northward toward the town of Sharpsburg and toward the thinly held Confederate right flank. Steadily the brigade pushed forward but their advance was ultimately checked by Confederate artillery which dominated the heights of Cemetery Hill. Without support to his immediate left, Christ ordered his men to hold their ground amidst a barrage of shell, grape, and canister fire. Late in the afternoon, and with Colonel Thomas Welsh’s Brigade now moving up to his left, Christ ordered his men forward once more, forcing the retreat of several Confederate guns. However, any success to Christ’s front was thwarted by the arrival of A.P. Hill’s Light Division from Harper’s Ferry, and their attack on the 9th Corps’s exposed left flank. Withdrawn to a position near the bridge, Christ’s men remained here until the following morning, when they were relieved by General George Morell’s 5th Corps Division. Casualties in Christ’s Brigade at the Battle of Antietam numbered 245 men killed, wounded, and missing, with the heaviest loss occurring in the ranks of the 17th Michigan.

Benjamin Christ continued to lead his brigade for another two years following the battle of Antietam. Throughout this time, he saw action at Vicksburg, Knoxville, and at the bloody battles of the Wilderness, Spotsylvania, and Petersburg during the 1864 Overland Campaign in Virginia. In all of these engagements, Christ commanded a brigade of troops. He received three wounds during the war, most severely at Petersburg on June 17, 1864. Perhaps it was because of this wound, or because of his lack of promotion, or a combination of the two, that Christ tendered his resignation from the service on September 30, 1864. He died less than five years later, on March 27, 1869, at the age of 46. His remains were buried in Minersville's Methodist Cemetery.

On September 17, 1904, on the 42nd Anniversary of the battle of Antietam, surviving veterans of the 50th Pennsylvania gathered on the battlefield to attend the dedication and witness the unveiling of their regimental monument. Standing atop is a bronze statue of Colonel Christ. . . 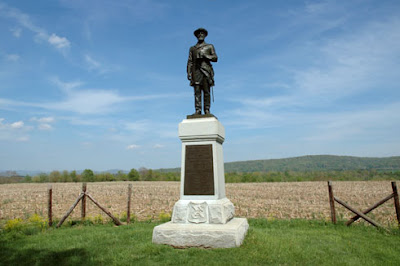 Benjamin Christ was a native of Schuylkill County, Pennsylvania, as were the soldiers who comprised the ranks of Companies A & C of the 50th PA Infantry. The 48th Pennsylvania was recruited solely out of Schuylkill County by James Nagle. It is very interesting (at least to me, being a native of Schuylkill County) that the only two monuments on the entire Antietam Battlefield that feature bronze statues of higher ranking Union officers are dedicated to the 48th and 50th PA Regiments. Those statues are, of course, Benjamin Christ and James Nagle. The monuments to these regiments are separated by only a few hundred yards on the southern part of the battlefield. Christ and Nagle, both one-time sheriffs of Schuylkill County, lived only a few miles away from one another, and today lie buried less than five miles apart. 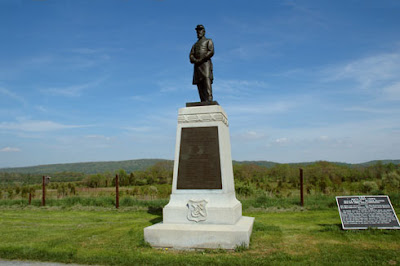 Thanks John, this is lovely material, as usual.

Thank you for your posting - as a child I was in a scouts orienteering course on the battlefield - seeing this statue made an impression as we share last names. I was pleasantly surprised to see your post top the search results for "Benjamin Christ" and even more pleased to read what you had written. Thank you.

Another surname Christ appreciating this write up, after encountering Colonel Christ in Antitem.

Happy to find this write up that has provided me a bit more info about Benjamin Christ. I am descended of the Christs of Berks County, and although I have not found the exact link between my line and Benjamin's it is clear by the common family names and the photograph that we are related; he bares a strong resemblance to the rest of my family line. It's likely he was either an uncle or a cousin to my line.