The Little-Known Civil War: The Story of the Enchantress and How Fourteen Captured Union Officers Escaped Execution

I came across the fascinating, but little known, story of the Enchantress while researching the life of 9th Corps officer Orlando B. Willcox in preparation for my hike on the Final Union Attack at Antietam. The story further confirmed to me that in addition to the great campaigns and battles, there remain thousands of interesting and truly fascinating incidents of the Civil War that merit our attention.
* * * * * * * * * * 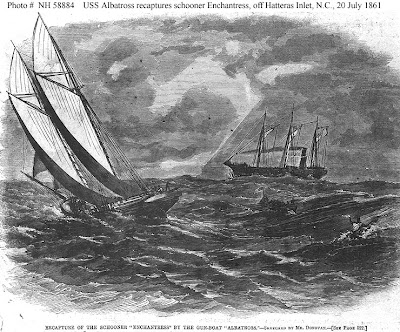 The Capture of the Enchantress by the US Albatross
On Monday, July 22, 1861, just one day following the Union debacle at Bull Run, the USS Albatross captured the merchant schooner Enchantress on the rough seas off the coast of Hatteras, North Carolina. This was not the first time the Enchantress was captured. Indeed, just two weeks earlier, on July 6, the schooner, originally a US ship from Newburyport, Massachusetts, was captured by the Confederate privateer Jeff Davis and was immediately put into use by the Confederacy. After the Enchantress was re-captured by the Union navy on July 22, the fourteen Confederate privateers on board were sent to prison and were charged by the Federal government with piracy. Three months later, on October 22, 1862, four of the Confederate crewman from the Enchantress, plus another ten from the captured Confederate privateer Petrel, were found guilty and were sentenced to be hanged.
Outraged by the whole affair, and especially by the verdicts, the Confederate government responded by selecting an equal number of captured high-ranking Union officers and threatened to execute these prisoners of war should the United States carry out the sentences of the condemned privateers. The fourteen US officers chosen were as follows: Colonel Michael Corcoran of the 69th New York, Colonel Orlando B. Willcox, 1st Michigan, Colonel William Lee and Major Paul J. Revere, 20th Massachusetts, Colonel Milton Cogswell, 42nd New York, Colonel Alfred Wood, 14th New York, Colonel William Woodruff and Lieutenant Colonel George Neff, 2nd Kentucky, Lieutenant-Colonel Samuel Bowman, 8th Pennsylvania, Major James Potter and Captain Hugh McQuaide, 38th New York, Major Israel Vodges and Captain James Ricketts, 1st U.S. Artillery, and Captain George Rockwood, 15th Massachusetts. However, because two of these officers--Ricketts and McQuade-- were suffering from terrible wounds, they were replaced by Captain Henry Bowman, 15th Massachusetts, and Captain Francis Keiffer, 71st Pennsylvania. These officers had been captured earlier that year, the majority of them at the 1st Battle of Bull Run in July and at Ball's Bluff in October.
Having made their selections, the Confederate government waited to see if and how the U.S. would respond. A tense showdown ensued between the two governments, and the lives of 28 men--14 Union and 14 Confederate--hung in the balance. . .
Finally, during the winter of 1861-1862, the U.S. Government reconsidered the case and decided, ultimately, to treat the captured Confederate privateers not as pirates, but as prisoners of war. Their sentences of execution were thus voided, and everyone breathed a little easier.
Eventually, all the prisoners were released with the exception of two men, one a Confederate and the other Captain Hugh McQuade, who died while being held as a prisoners of war.
* * * * * * * * * *

Colonel of the 69th New York 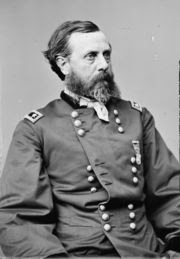 Orlando Willcox
Captured at 1st Bull Run and threatened with execution. Following his exchange from a Confederate prison, Willcox rose to the rank of major general and commanded a division in the 9th Corps for most of the war.
* * * * * * * * * * 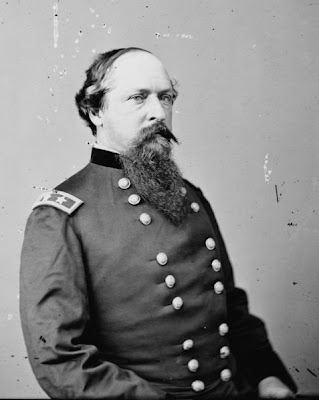 James B. Ricketts
His wounds at 1st Bull Run removed him from the list of Union officers chosen for execution over the Enchantress Affair. He survived his wounds and would go on to a stellar war record chiefly as a Union division commander in the 1st and 6th Corps. 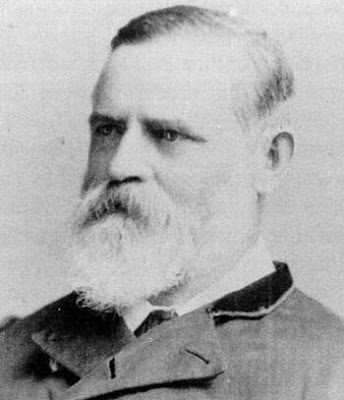 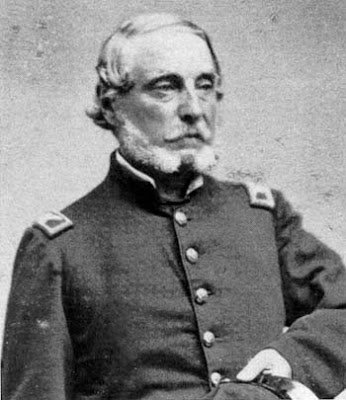 Major of the 20th Massachusetts

Grandson of Revolutionary War Hero and Midnight Rider Paul Revere; survived the tense days following the capture of the Enchantress only to be mortally wounded on July 2, 1863, at the battle of Gettysburg.

Good stuff, John. I made a few posts about some of the Bull Run prisoners. You can find links to them in this post:

Corcoran and Willcox were held together for a time. Orlando had some very interesting things to say about the Irishman.

Keep up the good work!

Your dual spelling of my three-great grandfather's brother was telling: All the military accounts I've seen of him (including pre CW accounts from New Mexico) use "McQuaide," but his brother, who became a Tammany Hall heavyweight, was John McQuade, which spelling was passed down to my grandmother's family. (I'm not sure if I have any McQuaide cousins.) Captain McQuaide belonged to the 38th NY, was wounded at Bull Run and died the day after Christmas 1861 in Richmond. I'm guessing he wasn't well enough to be sent to Castle Pinckney in Chaleston with the rest of the POWs.

Thanks right cousin John, Hugh McQuade (McQuade) is our cousin and he spent 10 years in the Calvary before he joined the 38 NYSV.

Hugh had his leg amputated in the Prison and lived for 6 months before he died, he should have been awared a medal but I have all his Miltary Records and no medals were mentioned. Hugh was a hero!

He's listed as "McQuade" in all of the listings that I've found for him, including the regimental muster rolls.

I'm trying to put together a piece on him for the fallen cavalrymen section of my blog (Crossed Sabers). if you have information that you're willing to share, please contact me there.

How do I get to the Crosses Saber blog?

I am looking for a picture of Captain Hugh McQuade he was with Co. F 38th NYSV.

JDH: You've started something here. Don at Crossed Sabers is collecting more info on Hugh McQuade. Thought you might enjoy this: My (living) cousin Hugh found a first hand account of the lottery in which the Union officers were chosen as hostages:
http://books.google.com/books?id=5kJg_gCgRwMC&pg=PA284&dq=%22captain+hugh+mcquade%27&ei=U7fOR-GeOJXOywT8goiwBQ#PPP1,M1
Journal of Alfred Ely, a Prisoner of War in Richmond; c 1862
Pp 209- 216
Cheers, John

I'm writing a book, "Shadows of the Mast," based on the diaries and letters of my great-grandfather, Charles Nelson Atwater, USN. He encountered Milton Cogswell when he was governor of the Old Soldiers Home in Washington. He had a fascinating career beyond the obvious engagement at BAll's Bluff, where he was later proclaimed a hero for a gallant effort to rally the Union troops. He also was at the laying of the golden spike at the joining of the Transcontinentl Railroad, was governor of Charleston during Reconstruction, and fought in the Western Indian Wars. -- Russell Neyman, Port Orchard WA