Soldiers of the 48th: Private William A. Miller, Co. A: The 48th's First Death

Joseph Gould, in his regimental history published in 1908, recorded that during the four years of the Civil War, 236 men of the 48th Pennsylvania died while in service. He took this number (and the lists of the dead by company) directly from an 1865 publication titled The Patriotism of Schuylkill County, edited by Francis Wallace. Published shortly after the guns fell silent, Wallace's work was rushed to print before the true casualties figures from the war surfaced. Indeed, the number of men who died in the 48th was significantly higher. Scores of men remained unaccounted for, either missing in action, or simply listed as "Not On Muster Out Roll." It is not a stretch to say that the number of fatalities in the regiment far exceeded 300 men. The causes of deaths in the regiment were nearly evenly divided between battlefield casualties and those who succumbed to disease.
* * * * * * * * * *
It was disease that claimed the life of the 48th's first wartime death: Private William Miller, of Company A. When the call went out for volunteers in the summer of 1861, Miller, a nineteen-year-old yeoman from Port Clinton, was quick to enlist his services. Mustered into service on September 17, 1861, Miller was dead just two months later, passing away on November 21, while the regiment was stationed on Hatteras Island, North Carolina.
The body of the young private was sent home to Schuylkill County for burial, being interred in my own hometown of Orwigsburg. I was in Orwigsburg last week and snapped this photograph of Private Miller's grave: 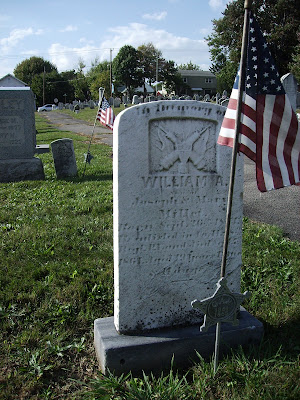 Miller was, sadly, the first of hundreds of soldiers in the 48th Pennsylvania who sacrificed their lives fighting for the Union.