The Fog of War? 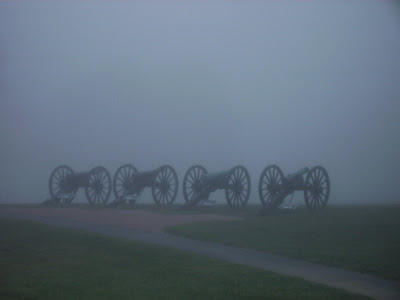 Mornings lately have found the Antietam Battlefield enshrouded in a heavy, heavy fog. Today's fog was particularly thick, and it did not lift until well after 10:00 A.M. Visibility was, of course, limited. I took a few photographs of the area just immediately outside the Visitor Center. 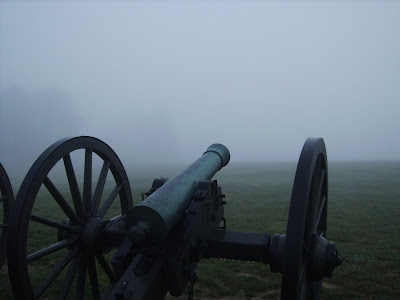 From the cannon representing S.D. Lee's Battalion, opposite the Dunker Church, the fog made it impossible to see even the Maryland Monument, which is just a hundred or so yards away. . . 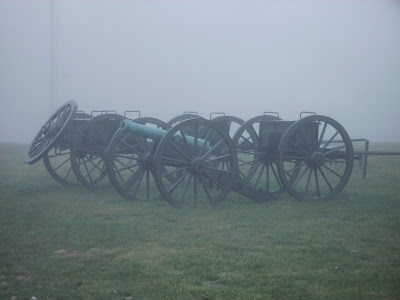 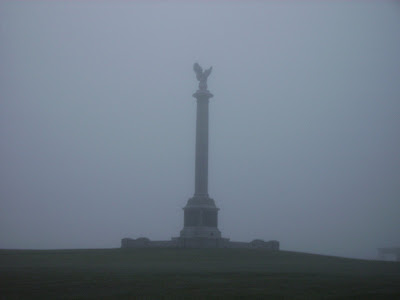 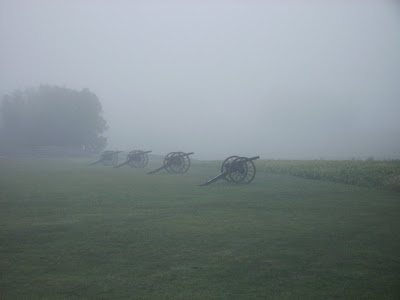 The 1st Rhode Island Artillery Battery, Captain Tompkins's guns, was all one could see this morning from the southern side of the Visitor Center. . .

* * * * * * * * * *
Of course, the fog played a role during the battle of Antietam itself, and every foggy morning we have, well, I naturally think about this role. . .and how it may have saved Robert E. Lee and his Army of Northern Virginia. Indeed, during his invasion north, in which everything seemingly went wrong for Lee, the fog...well, the fog was just about the only thing that played in his favor.
When Lee crossed the Potomac in early September, launching his first invasion north, he was fully expecting that all of the success he had enjoyed during his first three months in army command would certainly continue on U.S. soil. But whereas everything went right for Lee before the campaign began, as soon as his men set foot on Maryland soil, everything now started to go wrong. Straggling was at one of its all-time highs in the history of the Army of Northern Virginia, as Lee's men were simply exhausted from what was ten continuous weeks of fatiguing marches and terrible combat. The reception Lee's men were given in Maryland was also a big disappointment for the Confederate Army commander. He was expecting an ovation, that he and his men would be welcomed as heroes and as liberators to an oppressed people. Instead, he was given a cool and sometimes hostile reception from the people of Maryland. Add to these setbacks the fact that the Union garrison at Harper's Ferry did not evacuate their post, as Lee fully expected. This forced him to split his army into many parts to, at the same time, continue his movement north and to deal with those stubborn Yankees at Harper's Ferry. If things couldn't get worse, his plans--Special Orders No. 191--fall directly into the hands of his opponent, General George B. McClellan, who will push his Army of the Potomac west from Frederick in order to cross South Mountain, and, hopefully, cut Lee's army in two and "beat him in detail." Lee, who was on the offensive for ten days, was now forced to assume a defensive stance. His men under D.H. Hill and Longstreet put up a heroic stand at South Mountain on September 14, but by nightfall, McClellan's men had gained a strong foothold on the mountain, and with more and more Union soldiers arriving, Lee decided in was time to head home. . .his campaign of invasion over. But retreating from South Mountain, Lee would learn of the imminent surrender of Harper's Ferry, and he saw that the ground surrounding the town of Sharpsburg, along the Antietam Creek, was ideally suited for defense. Plus, he came north looking to fight a battle--and gain a victory--on U.S. soil. He would have preferred to have fought that battle much further north, but, still, the banks of the Antietam was as good a place as any to make a stand. D.H. Hill's and Longstreet's men are put into position, and Lee anxiously awaits the surrender of Harper's Ferry and the arrival of Stonewall Jackson's men. But would they arrive before the Union army attacked again? George McClellan was certainly planning to attack, but on September 15, his men would not arrive on the eastern side of the creek until late in the day, too late, in fact, to launch an assault of Lee's new line. So McClellan planned to attack early on September 16.
But when Tuesday, September 16, dawned, a heavy fog enshrouded the area making it impossible for McClellan to see Lee's lines and to determine the size of the Confederate force along the Antietam. As the hours passed with the fog remaining heavy, Jackson's men tramped their way northward. All but one of his divisions would be on the field by early the next morning.
For Lee, with everything going wrong thus far in the campaign, something had finally gone right: the fog of war, literally, worked to his advantage, giving Jackson time to get his men to Antietam, and preventing McClellan from launching his attack on the morning of September 16.
Posted by John David Hoptak at 7:00 PM

I really enjoyed this post as you effciently link a series of foggy mornings today to very real consequences that weather brought to Antietam in '62.

I also found myself thinking (perhaps for the first time) that General Halleck deserves substantial credit in ordering Col Miles not to simply evacuate Harpers Ferry as Lee advanced north of his position to Hagerstown - but to wait until relieved by Little Mac. It is easy to focus on McClellan's tentativeness after finding Order 191 and his culpability in not attacking after he came up on the 15th, but your post really got me thinking critically about Halleck's actions in manipulating Lee, forcing the splitting of his army, leading directly to the defeat at South Mountain and the abandonment of the Maryland Campaign. One could argue that the victory on South Mountain is more attributable to Halleck than McClellan. That is certainly not a point I have explicitly considered before. I wonder if there is any retrospective in any of Halleck's writings on this?