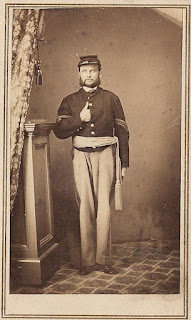 
Today, a quick look at the life and service of Joseph Edwards of Company I. Edwards, a native of Schuylkill Haven, enrolled on August 15, 1861, and was mustered into service as 1st Sergeant of Company I. He was, by occupation, a tailor and at age 34 was among the older soldiers to enlist that summer of '61. He stood 5'4", with Light Hair, a Light Complexion, and Gray Eyes. Edwards served with usual distinction, advancing in rank in 2nd Lieutenant in September 1863 and finally to 1st Lieutenant on March 16, 1864.


While at the head of his company, Edwards fell wounded three months after his last promotion, on June 17, 1864, outside Petersburg. The regiment suffered heavily that day, losing several fine officers including, of course, Edwards. He was transported to Mt. Pleasant U.S. General Hospital where, on July 2, he succumbed to his wounds. He left behind a wife, Masura Edwards, of Orwigsburg and a young son. The remains of Lieutenant Joseph Edwards were brought back to his native Schuylkill Haven, where he was laid to rest in the Union Cemetery. 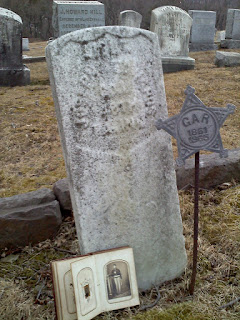