Yesterday, April 12, 2011, marked the 150th Anniversary of the Civil War's opening shots at Fort Sumter. What followed were four of the most brutal and devastating years in America's young history. In terms of numbers of alone, more than 620,000 soldiers--Union and Confederate--perished in the great American conflagration, or 2% of the entire population. Today, 2% of our population would exceed six million. Yet that 620,000 number is far too low, for they stopped counting the war's casualties in the Spring of 1865. But what of those whose wartime wounds cut short their lives in the late 1860s and 1870s? Those young men, carrying the scars of the conflict and perishing in their thirties and early forties?
For the past several months, my focus on this blog had been on the First Defenders of the Union, those very first volunteer troops who arrived in Washington upon the outbreak of civil war and in response to President Lincoln's April 15, 1861, call-to-arms. They were Pennsylvanians from the counties of Schuylkill, Mifflin, Lehigh, and Berks, some 475 strong who entered the nation's capital on the evening of April 18, 1861. Thus far in our examination of these largely overlooked early volunteers, we have looked at the National Light Infantry and Washington Artillerists of Pottsville, the Logan Guards of Lewistown, and the Allen Infantry of Allentown.
Today, we will focus on the last of the five companies of First Defenders, the Ringgold Light Artillery from Reading, in Berks County.

* * * * * * * * * * * * * * * * * * * *
The Ringgold Light Artillery was a militia company formed in Reading, Pennsylvania, in August 1850. From that point until the outbreak of civil war, it was commanded by Captain James McKnight who, after serving his first ninety-day enlistment with the First Defenders, would go on to serve as major of the 5th United States Artillery.
McKnight kept up his company with regular training and parade reviews. In the winter of 1860-1861, in the midst of the secession crisis, McKnight called together his company more frequently, preparing them for what he prophesied would be armed conflict with the rebellious Southern states. On April 15, just three days after the war's inaugural shots at Sumter, the Ringgold Light Artillery was drilling, with full ranks and fully equipped, at their parade ground near Reading when a telegraph arrived announcing Lincoln's call for 75,000 men to serve a three-month term of service.
Immediately, a telegraph was fired off to Governor Curtin's office in Harrisburg: "The Ringgold Light Artillery are parading this morning with their guns for practice; have ninety men on parade, every one of them expecting to be ordered on duty for the U.S. service before they leave their guns."
A short time later, a response came from Eli Slifer, Secretary of the Commonwealth of Pennsylvania: "Captain James McKnight: Bring your command to Harrisburg by first train. If any of your men need equipments, they will be provided by the general Government. Lose no time."
And with that, the Ringgold Light Artillery marched off to war. . .and into the history books as one of the first volunteer companies to reach Washington after the start of hostilities. They, along the with National Light Infantry, Washington Artillerists, Logan Guards, and Allen Infantry, were the nation's First Defenders. 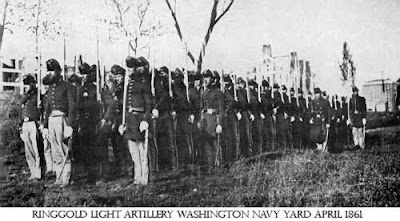 April 21, 1861, Photograph of the Ringgold Light Artillery at the Washington Navy Yard 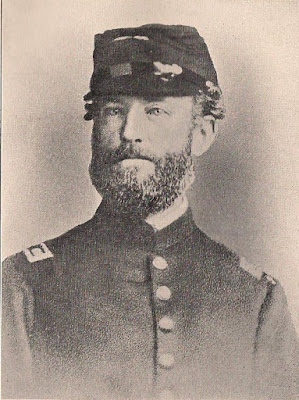 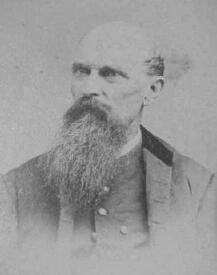 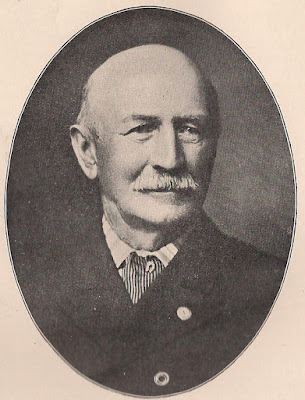 Posted by John David Hoptak at 6:22 AM

Great information. I am starting to do some research on a canteen I purchased many years ago.
It's a militia style canteen with the following inscribed on it...
George W. Green
Ringgolds Artillery
Washington, DC.
May 11th, 1861

I can't remember the exact day in May but I think it was the 11th.
With the information provided here I think I am on the right track. Thanks again....

My Great Great Grand Father was William Miller of the Ringgold Light Artillery of Reading Pennsylvania. I am looking for a picture of him. Any suggestions where I should look?