Today, Sunday, May 27, 2007, marks the 50th year since my grandfather, Nicholas Mitsock, was killed in a mine collapse. I regret to say that I don't know that much about him. He was a first generation American, was a good baseball player and dancer, and served in World War II. Like many in Schuylkill County, he found work in the coal mines. On May 27, 1957, he headed off to work as he would have any other day but shortly after entering the mines that morning, an explosion collapsed the walls and my grandfather, with a few others, was trapped. He was only 29 years old. With my 29th birthday coming up in September, it's hard to believe that my grandfather was so young when he died. He left behind a widow, my grandmother Baba, and five children, including my mom, who was six years old when her dad was killed. Of course, I never did get a chance to meet him but still I have missed him. I suppose we would be planning his 80th Birthday Party this year if he were still around. 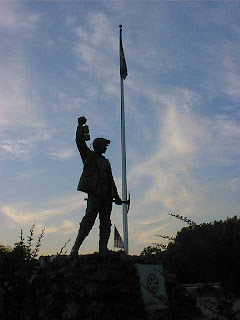 Posted by John David Hoptak at 6:39 AM