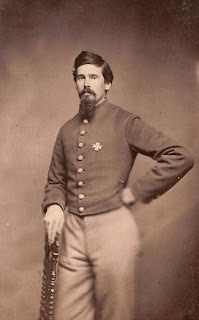 It has been a good while since my last 'Profiles' piece, so today I will take a look at Henry Krebs, Jr. With the outbreak of civil war in April 1861, Krebs, a farmer from southern Schuylkill County, enlisted as a private in the 9th Pennsylvania Infantry, a three-month organization that served out its term of service in the lower Shenandoah Valley. Upon his discharge in late July 1861, Krebs re-enlisted to serve a three-year, 'or the war,' term as a corporal in Company G, 48th Pennsylvania. His twenty years' of age was betrayed a little by his "grey" complexion, grey eyes, and dark hair, and at 6'1" in height, he was among the tallest soldiers in the entire regiment. The one-time farmer proved to be a good soldier, and an efficient officer. In September 1862, he was made the regiment's Quartermaster Sergeant, a position he held until September 1864 when he was discharged from the 48th Pennsylvania to accept a first lieutenant's commission in the 35th Regiment of United States Colored Troops (U.S.C.T.). Joining his command near Jacksonville, Florida, Krebs saw action at the battle of Honey Hill, South Carolina, where he received a severe wound. Following his recovery, Krebs next became an Aide-de-Camp to Brevet Major General Charles Devens, commanding the District of Charleston, South Carolina. He remained in the army until his discharge on June 1, 1866. He then headed west, settling in San Francisco, California. An Annual Survivor's Roster of the 48th Pennsylavania published in 1901 still listed Krebs's residence in the Golden Gate City, but I have yet been unable to determine the date of his death.
Posted by John David Hoptak at 7:00 AM